Its Brownlow time of year again, and the newly re-badged AutoZerrett Brownlow tipping algorithm we published last year is back and it is new and improved (hopefully!). To save going through the basics of how it works again, there is a fair bit of detail  in the post here.  AutoZerrett is powered by a machine learning algorithm called a Random Forest, which uses player’s statistics for each game to give them a probability from 0-100% of getting 3 Brownlow votes from the umpires. The three top highest probabilities for each games are awarded the synthetic votes. 6 years of data is used to train the algorithm and only 3 vote games are used as the target variable (1 and 2 vote games are discarded due to the mixed statistical signal that can give them i.e. umpires often give two votes to the best player on the ground from the losing team). There are pros and cons to the discarding of 1 and 2 vote games, but our testing showed that the predictions worked better without them (although Tom Mitchell or “Two Vote Tom” as we call him, may prove us wrong this year).

AutoZerrett performed reasonably well last year, but there was several areas we wanted to improve on. The main one was the lack of ability to recognise a 3 vote game from the games more enigmatic players, that is, Cyril Rioli, Buddy Franklin, ruckmen and Alex Rance. There are two main reasons behind this: 1. The readily available statistics do not capture everything, in particular relation to things like pressure acts, spoils, high skill efforts, eye catching marks and other non-tangible events that makes AFL what it is.   The second point,  arguably the more important, is that there just isn’t that many of them – the bulk majority of 3 vote games (~60%)  go to midfielders, and in the previous 6 years those votes have been distributed to inside midfielders more often than not.

What this means practically in machine learning is that we have class imbalance, or rare events, which we are trying to model. The first and obvious one is that we are trying to predict the 3 vote game, which for a particular game is only awarded to one out of 44 players playing (2.2%). The second is that even though a ruckman or a low possession forward with 15 pressure acts is not the “normal” way to get three votes, it doesn’t mean the umpires aren’t going to reward it. We dealt with the first issue last year using an cross-fold sampling scheme that used a different random sample of non 3-vote scoring games each iteration. Essentially we just changed the background data to cover a number of different statistical scenarios. This year we attempted to go one step further and improve the accuracy by creating artificial 3 vote games for low likelihood classes, essentially defenders, forwards and ruckmen, using a process called SMOTE. As the above table shows we created approximately 1500 data points using the existing statistical signatures to try and level the playing field for minority positions. To get an idea of whether this worked, we re-run last year the traditional way and the new way and investigate the error.

SMOTE worked quite remarkably well, improving error for every single position. The above table shows from left to right for each position type the average error per player using the traditional methods and the new SMOTE method. As you can see, last year’s model was overestimating inside midfielders by 1.67 votes per person, and under estimating rucks by 3 votes. The SMOTE predictions improved for all of the positions, albeit only a small improvement for the bucket group of “general” (not just Jon Patton). There is still work to be done on defenders, but as the last column shows they only make up 9% of the final votes so it doesn’t make too much difference unless you’re a Ranceophile.

One big difference in the way the results look this year is that last year we released one iteration of the model – the one we deemed the best looking (not very scientific really, but it worked). This year we are releasing the full spread of 100 models. There is likely models in the data that are more conservative, and ones that over-estimate, but the hope is that the averaged response gives a good indication of likelihood. Dustin Martin’s modelled votes are included here to show the variation between models:

As you can see, Dustin is project to get on average 43 odd votes – which is huge – but there are some models where he gets below 40 and even one where he gets 50 (massive outlier). Our gut feel is that these numbers are over estimating, and a conservative approach should be taken however we will wait and see. 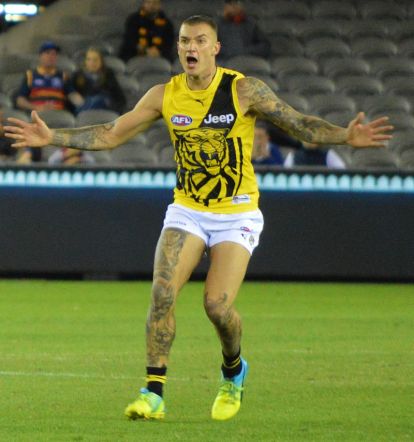 Dustin questions the 3 models which had him under 40 votes.

This year, we have put an emphasis on generating usable outputs and visualisations. Our 2017 Brownlow report breaks down predictions into round by round, team by team and overall ranking which should be a bit easier to use than the table format last year.

So without further ado,  winner and the remaining 49 of the top 50 predicted vote getters for 2017 is… 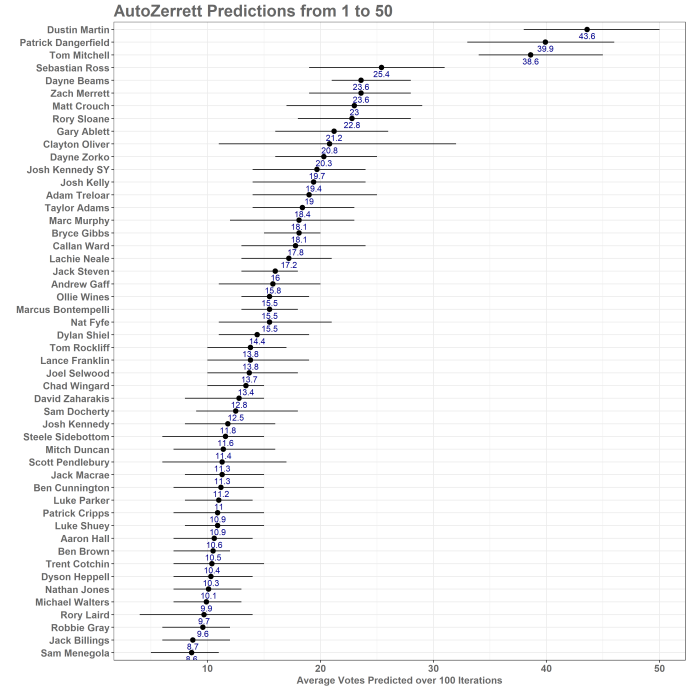 We will comment more on the predictions throughout the week, but a couple of key points that jump straight out:

Again, the results are included in a downloadable PDF in full here:FatStats AutoZerrett 2017 Predictions V1.4 Please hit us up with any questions or observations (especially if we have stuffed anything up). We are definitely interested if people use this data to have a punt, however as usual remember that its at your own risk and FatStats takes no responsibility. That being said, we will be going through the data ourselves for punting purposes and we plan on releasing bits and pieces during the week so follow along if you’re interested. Enjoy!!

Hey Damien, you should just worry about that shot in 1994. Link if you can't remember – https://t.co/6EyZ1jezft #amiwatchingachoker

Clayton is as unpredictable on twitter as he is for the brownlow medal.

Notes: All data is sourced from http://www.afltables.com.au. All images are from wikimedia.creative commons and Clayton’s tweet is Clayton’s tweet. All processing was carried out using R Studio which is open source and great.